Running in a 24 hour ultra race was never in my race plan for this year.
When I saw a Tweet from Women’s Running Magazine saying they needed one more person to join their team for the Adidas Thunder Run 24 Hour I just knew I had to apply.
After a brief exchange of emails I was told that the place was mine and I went a bit mental in the office to say the least!
For those of you who aren’t familiar with it, the Adidas TR24 is a 24 hour race running laps of a 10k trail route at Catton Park, Derby. Runners can take part in teams of eight, six or five, and for the serious ultra runners  you can even opt to run it in a pair or as a solo runner (hats off to you guys – I don’t know how you do it!). As long as someone from the team is on the course at all times you’re still in the race. Everyone has to complete at least one lap but after that you can run as many laps as you want from 12pm Saturday to 12pm on Sunday.

Our team was made up of a variety of runners, some were seasoned marathon runners, others were novices but we all had one thing in common; we loved to run and that bonded us instantly. We also had Jon in our team of six, who had been swapped over from the Men’s Running team. 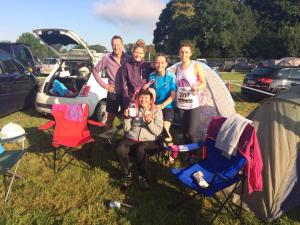 I arrived on Friday night to set up camp and as we were an Adidas sponsored team we were shown to a pitch right near the start line – perfect. Not only that but Adidas were kind enough to kit us out in their latest sportswear and adizero trail shoes which are my new babies, I love them. A HUGE thank you to the Adidas team.

After a quick team talk on Saturday morning we decided the order we were running in, how many laps we ideally wanted to complete and most importantly, what snacks we had all brought to re-fuel with. I was first up and took the orange snap bracelet (our relay baton) to the start line with a mixture of enthusiasm and the usual pre-race nerves.

The route was undulating to say the least and had some killer climbs but the scenery was fantastic and all around an enjoyable route, which was a good job really as I was going to get pretty familiar with it over the next 24 hours! I completed my first lap in 56 minutes which is a good 10 minutes slower than my 10K road race PB but I was pleased and wanted to pace myself for the next several laps as I was hoping to run at least 40K.

My strategy after each lap was to stretch for 30 minutes to an hour and drink a Lucozade Sport Caribbean Burst (I could drink these all day they’re so good) and then eat something such as a banana before refueling properly with some pasta salad or couscous. 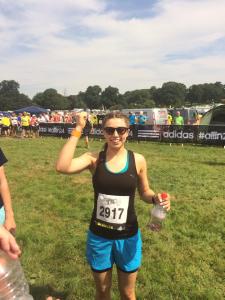 Taking the baton for the first lap

We all completed our first two laps in good times and before we knew it darkness fell and it was time to get the head torches out for the third lap. Having never run that late at night I wasn’t sure what to expect. So as I laced up my trainers for the 12.30am lap I went out at a more gentle pace. Running in the dark was strangely therapeutic though and it was fun jumping over tree trunks guided by just one beam of light from your head.

A couple of hours of interrupted sleep later and it was time to go again and I think it was this lap I found the hardest as fatigue, both mentally and in my muscles, was beginning to set in. But I can honestly say that once I was running I felt great again. It looked as though it would be our final round of laps as Jon, the last in the relay leg, went out at about 10.55am. Although 12pm is when the race officially  finishes, if a runner is on the course before then, even at 11.59.59am, then the lap still counts. The team said that it was up to me whether I decided to go for it and after some deliberation I decided that if Jon was back before 12pm I’d go for my fifth lap. He came in at about 11.52am and I decided to go for it, the adrenaline powering me through. Finishing that fifth lap was amazing and I was so proud to have completed 31 miles for the team. 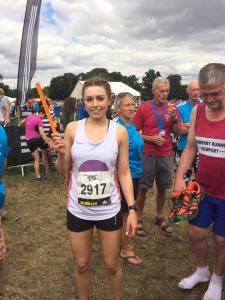 Straight after completing my 31 miles for team Women’s Running 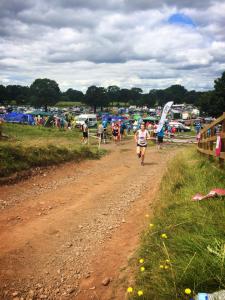 In total, team Women’s Running ran 23 laps. But for me, the best part of the weekend was being around like minded people who shared the same passion and genuinely making some fantastic friends and meeting amazing people. After one lap a lady came up to me to say thank you for powering her through a lap when she was at a low point – for me that was a priceless moment.

The atmosphere across the whole weekend was amazing and I can’t wait to go back and take on Thunder Run next year! 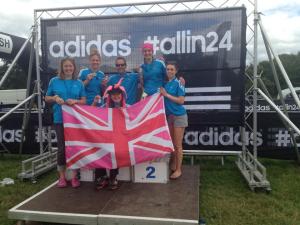