Get yourself to The Garden in Hale

Balance in my life is always restored after I’ve been to see my best friend, Liana. Visits to Liana’s always involve great food, training and hysterical laughter at some point throughout the weekend. A recent visit to her house was no exception.

We rustled up a delicious dinner on Saturday evening of scrambled eggs, smoked salmon, spinach, chives (who are we?!) and avocado – we LOVE breakfast at any time of the day, especially for dinner. Sunday morning was a knockout egg scramble with chilli and chives before we hit the gym for a strength session.

We have been dying to try Bosu Body Bar in Chorlton for ages as it looks amazing but sadly for us it wasn’t meant to be as they are closed on a Sunday so we had to go in search of another fantastic healthy eating place to fill the void. Liana had been to The Garden, in Hale before with her friend so even though it was a good 30 minutes away after looking at the menu we decided that it would be worth it.

The Garden offers a selection of healthy, organic dishes using local produce and has an array of mouth-watering clean treats.

45 minutes later thanks to horrendous traffic we arrived delirious with hunger but the friendly staff soon had us sat down at a table browsing the menus with two tasty drinks on the way.

Liana went for a Green Peace smoothie which was made up of spinach, avocado, apple, kale, cucumber, parsley, wheatgrass and spirulina while I had an I am Balanced juice of coconut water, fresh aloe vera and fresh peppermint. They were both served in charming jam jar style jars with cardboard straws. They also do amazing looking shakes and a raw cacao smoothie, too.

Choosing lunch was just as hard as choosing a drink as the whole menu is full of delicious superfood dishes packed full of flavour and goodness.

Liana went for the Rainbow Spaghetti which was seasonal vegetable spaghetti, which you could have raw or al dente, served with a choice of tomato, coriander and chilli or a kale pesto sauce. You could then choose from quinoa meatballs, organic salmon or organic chicken. Liana had kale pesto and organic chicken and said it was delicious.

Meanwhile I went for the Abundance Bowl with king prawns. This was a big, hearty bowl of cauliflower rice, chilli and lime chickpeas, spring onions, parsley, radishes, apple, sunflower seeds and pomegranate seeds topped with pistachios a lime and mustard dressing. It was really tasty and the cauliflower rice was very filling but the only thing I would say is that I would’ve liked more dressing.

We didn’t stop there either. We also got some kale chips which had been cooked with some sort of cashew butter making them even tastier than regular kale chips, as well as and dips and crudités. The three dips we chose were houmous, sundried tomato tapenade and cashew cheese.

Enjoying the chilled atmosphere we decided we wanted to stay a bit longer, i.e. we weren’t done eating, so we checked out the dessert menu. Everything looked delicious but what we really had our eyes on were the blueberry buckwheat pancakes on the breakfast menu. The staff and the chef were kind enough to make us them and we enjoyed them with dairy free ice cream, banana and homemade chocolate sauce. We also threw in a homemade date and raw cacao protein ball on top – us girls can eat! 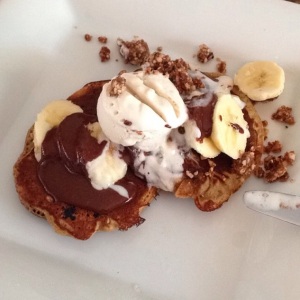 If you live in Manchester/near Manchester or are there for a day trip I’d definitely recommend checking out The Garden, it’s well worth it. It’s a health food lover’s paradise. #earthfriendlyfood

One thought on “Nourishing our bodies at The Garden, Hale”